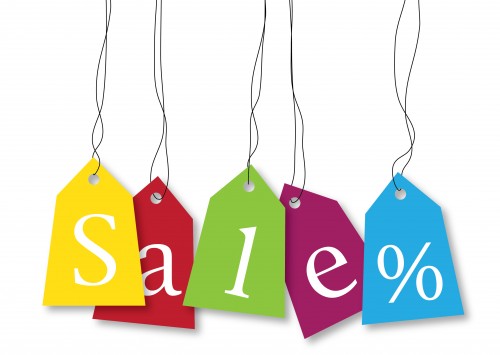 Third-party (3P) sellers have always been a big part of Amazon's business plan. Since the beginning of the holiday season in 2013, however, they are also allowed to participate in highly lucrative Gold Box deals. The results of this e-commerce decision were nothing short of staggering.

3P sellers now account for more of the total revenue share than Amazon does directly. This is due in part to Amazon Deals, but has a great deal to do with Amazon's FBA (Fulfillment By Amazon) program as well. Amazon's increasing willingness to include 3P sellers in its site-wide promotions such as Black Friday and Cyber Monday deals has been a major boon to both sellers and shoppers.

Today, we'll take a look at some of Amazon's relevant numbers over the past two years concerning the increased use of Amazon deals and 3P promotions. We'll also suggest ways for you to take advantage of this data, so you can enjoy your own e-commerce boost when the holidays come around.

Before we get down to the nitty gritty, it might be helpful to go through the different types of Amazon deals out there. That way you know which promotions you're able to run, and which are available only as 1P Amazon deals.

The first category of interest is Amazon's Warehouse Deals. These are products that have been either damaged during delivery or in Amazon storage. It includes returned or refurbished items as well.

These items are generally limited to FBA sellers, and for good reason. Amazon isn't likely to sell any products that it didn't damage itself. To be honest, you don't want any items you're listing to appear in Warehouse Deals. If you're using the FBA service, it's better than nothing, and you will make a profit from the sale, but so will Amazon.

You can, however, utilize the warehouse Amazon deals to source items for your own drop shipping business at discount prices. There's always a silver lining!

Amazon's Lightning Deals are promotions that are limited in number, and only available for a short period of time. These Amazon deals are also, unfortunately, available to sellers on an invitation-only basis.

Amazon offers select third-party sellers with large sales volumes the opportunity to get involved with Lightning Deal promotions. If you're absolutely insistent about pursuing this promotion for your listings, you can inquire to an Amazon vendor manager, but these are private staff members who don't advertise their contact details online.

Basically you have to know someone already to contact them. Start scraping LinkedIn if this is the route you want to go. Otherwise, you'll just have to start moving a great deal of product through Amazon and hope that somebody takes notice.

Gold Box Deals are the Amazon deals I referred to earlier, the ones that Amazon offered as options for sellers before the holiday buying season revved up in 2013. Lightning Deals are actually a subset of Gold Box Deals, but there are three more categories under the Gold Box umbrella:

Like Lightning Deals, Gold Box Deals are available by invitation only, though the invitations are becoming more widespread in this category. Again, the best way to get items your items listed is to go through a vendor manager from Amazon, which is quite difficult.

If you do manage to find a vendor manager, you should note that these aren't your typical customer service-focused personnel. Their job is to make Amazon money, so you won't be asking them for help so much as pitching them an idea. Be sure to note the distinction and plan for the conversation accordingly.

The 3P Contribution to Amazon

It might surprise you to find out that Amazon's community of 3P seller's numbers more than 2 million. Last year, the number of units they sold totaled more than a billion. The transactional value of those units reached tens of billions of dollars.

Amazon is a company notorious for keeping its sales figures close to the chest. Recently though, it released some interesting data about its third-party sales, from which the chart above was constructed.

To be more precise, Amazon released a statement saying that the more than 2 million Marketplace Sellers sold more than a billion items across the globe. The company also mentioned that those sales accounted for “tens of billions of dollars.”

The truth is, Amazon marketplace sellers are responsible for at least 40 percent of the company's GMV (Gross Merchandise Volume, a metric describing growth). We'll get a bit more into this later. For now it's enough to know that the growth of Amazon as a company is largely due to the prominence of 3P sellers.

This is a huge boon to the company, considering Amazon receives fees from its 3P sellers that range from 14 to 40 percent of an item's purchase price, the total of which adds up to around 10 to 15 percent of the company's total revenue.

Of course, actual revenues are inestimable based on the information given, but it's still interesting to note that Amazon is getting somewhere between 14 to 40 percent of tens of billions of dollars from its 3P marketplace.

Now we're back to where we started: Explaining the Amazon deals' effect on sellers during the 2013 holiday season. Needless to say, it was sizable. 3P marketplace sellers, on average, generated 50 percent more orders on Cyber Monday in 2013 than in 2012.

That alone should tell you something, but of course, there's more.

Total sales increased for merchant clients by 36 percent during the 2013 holiday season, specifically between the last Thursday of November and the 16th of December. Isolated anecdotes from prominent Amazon merchants were also in abundance.

The president of Amazing Deals Online, Eli Silver Sakkal, is quoted as saying, "Amazon gave us an opportunity to offer an incredible holiday deal on Cyber Monday and we hit it out of the park… We experienced an unprecedented 5,000 percent sales growth spike on an item we listed with an attractive holiday deal price."

The following chart tracks Amazon's sales growth between 3P sellers and the site itself. Note the steep incline in Q4, the holiday season. 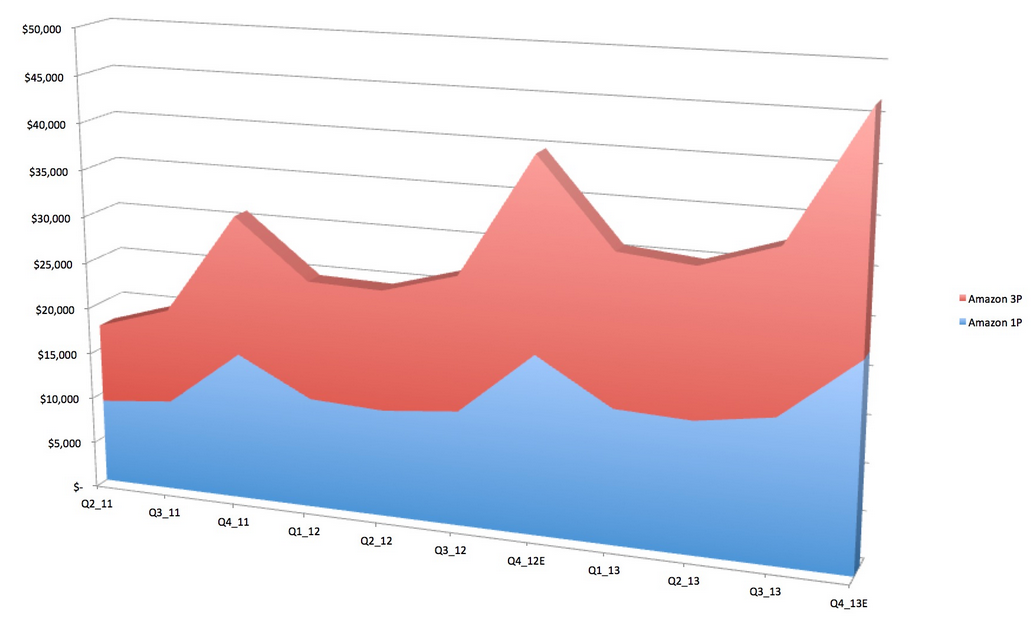 As you can see, the 3P sellers enjoyed significantly higher growth than Amazon did directly. Amazon's GMV in 2013 was estimated to be around $40 billion, with 3P sales making up more than half of that number.

Actual 3P revenues, as mentioned earlier, were far more modest than the grandiose growth numbers, clocking in at $2 billion, which is still a solid chunk of change regardless.

So despite the constant complaint of Amazon merchants, it seems the 3P marketplace is still putting forth some impressive growth. Certainly this data indicates that things are leaning in favor of larger retailers who are teaming up with Amazon to move their products, but it also leaves hope for the little guy to get in there and make an impact.

Beyond that, the outlook for future opportunities to participate in Amazon Deals is bright. Amazon has started offering these deals to the larger 3P sellers with great success. It would follow that there might be an interesting and similar result if the deals were offered to smaller sellers as well.

So if you have the opportunity to accept an invitation from Amazon to participate in one of its holiday Gold Box Deals this year, I highly recommend you take advantage. If nothing else, you can always peruse the Amazon deals to increase your own inventory and look to resell. Just be sure your profit margins are on point. And if you're too small to warrant the invite, let this serve as motivation to get your sales figures up!

What are your experiences with Amazon? Have you received any offers to participate in deals? Let us know in the comments!

How to Make More Money With Amazon Deals

Amazon Dropshipping Guide: How to Dropship on Amazon [FBA] 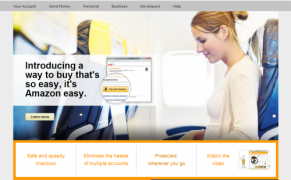