Comparing eBay Classifieds and how to get started 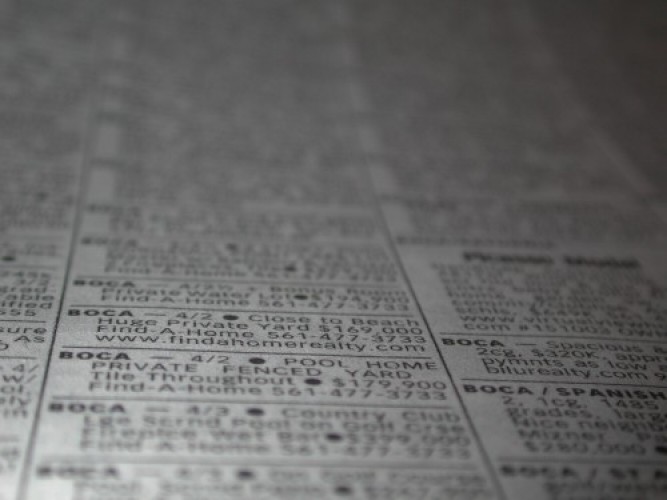 Let's face it: most of us have perfectly good stuff lying around that we don't have any use for. We just buy and buy and then end up with a whole lot of things we won't possibly use.

Back in the dark ages before the Internet, the most enterprising pack rats would take out an ad in the classified section of the newspaper or put a poster on the community board to sell off the clutter. They would get back some of what they spent and get rid of old junk at the same time.

Today, however, there is nothing easier than posting ads online. There are several very good sites that specialize in this, and people go for it like bees to honey. No fuss, no muss. Some folks (our readership among these) have even started businesses by buying stuff and then selling it online at a profit.

It is a fast and easy way to make a quick buck on the side.

There are those who are more successful than others, of course, so much so that they make a full-time living drop shipping. When asked, they attribute a major part of their success on their choice of online retail platform.

In many cases, the choice lies between eBay Classifieds and Craigslist. Today we'll compare the two, and find out which one really makes the grade as the go-to online classified site.

What Do the Numbers Say?

Before we start getting into the nitty gritty details, let's look at some statistics about how eBay Classifieds compares with Craigslist. 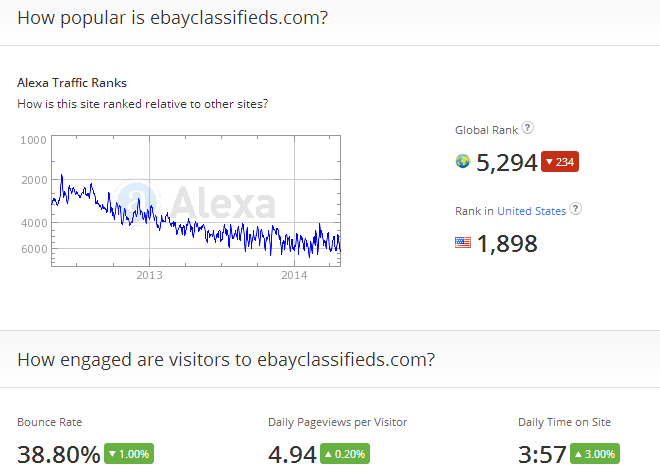 eBay Classifieds has a global rank of 5,302 and 1,887 in the US. It has a bounce rate (portion of single page view visits) of 38.7 percent with daily unique page views of 4.95 per visitor. On average, each visitor spends 3:57 minutes on site per day.

The sampling was mostly college-level females browsing from school. The US is the country of origin of 52.7 percent of visitors, followed by India (29.5 percent), and Canada (2 percent). 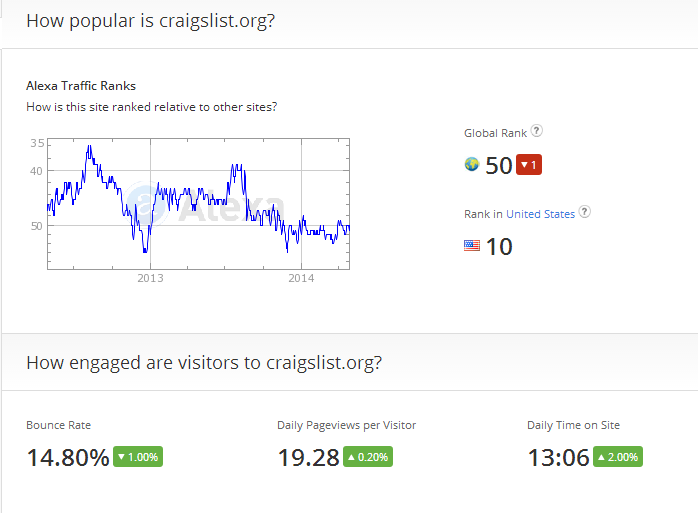 Craigslist has a global ranking of 50 and 10 in the US. It has a bounce rate 14.8 percent with daily unique page views of 19.27 per visitor. Each visitor spends an average of 13.05 minutes per day.

The sampling was mostly college-level females browsing from school. The US is the country of origin of 91.2 percent of visitors, followed by India (1.9 percent), and Canada (1.7 percent).

Both sites have seen a downturn in popularity recently, but this should most likely be attributed to an increase in popularity for major online retail sites such as Amazon.com. It is obvious from these numbers that Craigslist far outstrips eBay Classifieds in terms of popularity, especially in the US. This could be because Craigslist came first; it was first put up by software engineer Craig Newmark in 1995, initially to serve the online community in the San Francisco Bay Area.

eBay Classifieds, on the other hand, is a relative newcomer to the scene, an offshoot of eBay for the Canadian market launched in March 2005 as Kijiji. Country-specific Kijiji sites were renamed, and the U.S. version became eBay Classifieds in March 2010.

These are the facts. Now we come to the opinions, culled from forums by actual users of both Craigslist and eBay Classifieds.

Reviews pertaining to the current state of Craigslist are widely mixed. The notoriety generated by the dramatization of the Craigslist Killer notwithstanding, Craigslist remains one of the top-ranked online classified ads site in the world.

Overall users rate Craigslist negatively. Take a look at this forum, where users are complaining about problems with scammers, stalkers, flaggers, and the fact that the site appears to lack any effective customer service.

The same goes for forum users on the Warrior Forum, even though it was started by a member who did very well on Craigslist. The overall impression is that Craigslist is a good site to get leads because of the sheer number of people who go there, but not so great if you're looking to sell there directly.

There are complaints about outside links being prohibited, curtailing site promotion, and that the regulations were too strict. Tough restrictions make the establishment of long-term business difficult.

There has of course, been a lot of writing on this subject, and we can glean a lot of insights from this content.

According to this review from RealPageMaker, the popularity of Craigslist is its downfall. As an FSBO (for-sale-by-owner) site in the real estate market, for example, its popularity has made it anathema with real estate agents and brokers, who took their business elsewhere. This limits the options for those looking to rent or buy real estate.

Another negative is that the exposure provided by Craigslist  degraded when it started to disallow outside links and removed ads for this reason. Moreover, while Craigslist remain a free site, there is no option for sellers to stand out from other postings as they can in eBay Classifieds through ad upgrades, preferred placement, and paid links. In conclusion, the article gave the opinion that eBay Classifieds is the coming player in the online classifieds site war.

Another article talks about the user interface of eBay Classifieds is better than that in Craigslist in terms of attractiveness and user-friendliness. This is further illustrated in an article from Zurb.com that analyzes the organization for the two sites using a click test. One of the more important aspects of classified ads is how they're, well, classified. The users should be able to quickly hone in on the categories they need to find what they want. In print, by category is the only way to look for anything, but with online classifieds, you can also search for the item, service, or job itself.

In the click test, it took Craigslist users twice as long to click on the appropriate category for an uncommon item than eBay classifieds users. This indicates a higher degree of uncertainty, even despite the fact that more people use Craigslist than eBay Classifieds. Organizationally, eBay Classifieds is better, and therefore easier to use than Craigslist.

Informative authority About.com also weighs in, adding that the user interface of Craigslist is less attractive than eBay classifieds. The few images contained within are low-quality, and the information provided on most of the listings is meager. They tell the browser next to nothing about the history of the ad poster. As we've already mentioned, Craigslist is also full of spam, which certainly doesn't help its cause.

On the other hand, eBay Classifieds, is an offshoot of the very popular eBay site, which provides posters with options to place up to three images free, and more for a small fee, so that those interested will have a good preview of what is in store for them. Additionally, eBay Classifieds is free to use, and much more interactive and colorful.

Novice posters get clear instructions of how they can make an ad, and there's also a site-wide search function which includes category filters as well, giving the searcher more options.

For ad posters, eBay Classifieds gives more exposure, as the posting is also linked to the main eBay website.

Overall, current users prefer eBay Classifieds over Craigslist despite the popularity and lead generation potential of the latter. The question is, why do users even need eBay Classifieds when eBay is already an established site?

The main eBay website is doubtless more popular than the relatively new eBay classifieds, but the main site has limitations. It will not allow postings for items that can't be shipped legally, and there are some offerings that do not have categories on eBay.

When to use eBay Classifieds

The offshoot eBay Classifieds is most appropriate when:

You should not use eBay Classifieds if you're already an established user of eBay and you're satisfied with the results. eBay Classifieds is not meant to be a standalone e-commerce platform, but more of an expansion pack.

Users agree that Craigslist and eBay Classifieds are extremely useful as a medium for selling and buying products and services that aren't appropriate or allowed in much more established sites such as eBay and Amazon.

Online classified ads sites are appropriate for posts that feature items or services that are difficult, impossible, illegal to ship, or in which a time limit is not desirable.

It is the best option for local or limited-area advertisements as long as sellers and buyers exercise caution in completing transactions to avoid fraud or any other untoward incidents.

On testing both sites, Craigslist and eBay Classifieds are equally easy to post ads on. Whether the ads will yield the same results will revealed in time. Based on the comments of habitual users, it's likely that a lot of inquiries will be made through Craigslist but the eventual buyer will come from eBay Classifieds.

Overall, eBay Classifieds is the better option simply because sellers and buyers find it easier to use. It provides better exposure and customer service to sellers, and quicker navigation for buyers. While there are no guarantees for either eBay Classifieds or Craigslist, eBay Classifieds is considered a safer, more convenient way of doing online business for a growing number of people.

What kind of experiences have you had on eBay Classifieds? Let us know in the comments.

How to Get Started Selling on Amazon Australia

10 Mistakes I Made on Amazon when I First Started Selling

What I wish I knew when I started dropshipping with Shopify

Hello, thank you for this mention. We appreciate your feedback regarding the site, and hope that your users will consider us as an alternative to other classifieds sites. We just wanted to clarify that it is actually completely free to use our site. We do not offer additional paid features to get more exposure to your ad(s). It is 100% free!

Again, we thank you for detailed article on the benefits of using our site. Best of luck!
Reply